Dungeness and Red Rock CrabCrab Identification and Biology
Several species of crab are found in Washington’s marine waters and along its shores, though only a few are large enough to be of commercial and sport interest. Crabs are crustaceans, having an exterior skeleton or shell. Two crab species (Dungeness and red rock) are harvested locally. Crabs are most commonly harvested with crab pots but are also caught using ring nets, dip nets, and by wading in shallow water during spring and early summer.

One of the most popular items on Washington seafood menus is the Dungeness crab. This hard-shelled crustacean is fished from the Aleutian Islands to Mexico. The shell is purple-tinged, gray or brown on the back and the tips of the claws are typically white. The Dungeness crab can reach ten inches across the back though six to seven inches is more common. In Puget Sound this crab is most abundant north of Seattle, in Hood Canal, and near the Pacific coast. The Dungeness crab is frequently associated with eelgrass beds and prefers sandy or muddy substrates.

Another species similar to, but smaller than the Dungeness, is the red rock crab (aka red crab, rock crab). This species usually measures less than six inches across the back and is characterized by large claws. Despite being less meaty than the Dungeness, red rock crab meat is also very tasty. Where present in considerable abundance, the red rock crab is a serious predator on both oysters and hard-shell clams. In some areas, controls have been necessary to prevent undue damage to clam and oyster crops. It can be distinguished from the Dungeness by the presence of black on the tips of its claws and by its red coloration. The red rock crab also prefers rocky substrates, as the name implies. 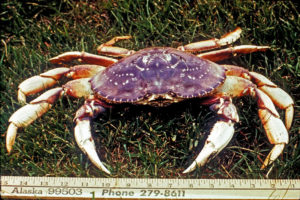 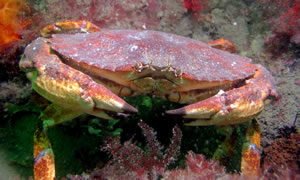