Dall’s porpoises are “high strung,” fast swimming members of the porpoise family and are common in the North Pacific Ocean. They can reach a maximum length of just under 8 feet (2.4 m) and weigh up to 480 pounds (220 kg). Males are slightly larger and thicker than females, which reach lengths of just under 7 feet (2.1 m) long. Animals in the eastern Pacific are smaller than those in the western Pacific and waters around Japan.

Dall’s porpoises have a relatively small, triangular head with little or no beak and a thick, robust body. The flippers are small, round, and located forward on the body. The dorsal fin is positioned in the middle of the back, triangular in shape, and often cant, or angles, forward. The tail stock and “keel” (otherwise known as the “caudal peduncle”) are exaggerated and create a pronounced hump, which is large compared to other marine mammals. Adult males have a thicker tail stock and forward projecting dorsal fin. The body is very dark gray or black in coloration with variable contrasting white “thoracic” panels and white “frosting” on the dorsal fin and tail that distinguish it from other cetacean species. These markings and colorations vary with geographic location and life stage, with adults having more distinct coloration.
The body shape of Dall’s porpoise makes it easily distinguishable from other cetaceanspecies. The animal has a very thick body and a small head. The colouration is rather like that of a killer whale; the main body of the porpoise is very dark grey to black, with very demarcated white patches on the flank and belly. The dorsal fin is set just back from the middle of the back and sits up erect. The upper part of the dorsal fin has a white to light grey “frosting”.
The fluke has a similar frosting. The adult fluke curves back towards the body of the animal, which is another distinguishing feature. It is larger than other porpoises, growing up to 2.3 m (7.5 ft) in length and weighing between 130 and 220 kg (290 and 490 lb).[3] There is also sexual dimorphism in the species, with males being larger, having a deeper caudal peduncle and a pronounced hump behind the anus.[3] Young Dall’s have a greyish tint and dark-colored flukes.

Dall’s porpoise prefers cold waters more than 180 meters (590 ft) deep.[3] It is found over the continental shelf adjacent to the slopes and oceanic waters.[6]While it mostly lives in offshore waters, it does occur in deep coastal waters off North America.[4] There, it typically stays close to deep-water canyons.

Dall’s porpoises primarily eat small fish and cephalopods.[4] Schooling fish, such as herrings, anchovies, pilchards, mackerels, hake and sauries are favored prey,[3][4] as well as mesopelagic fish such as myctophids and deep sea smelts.[4] They may also consume krill, but these are probably not important in their diet.[4] Dall’s porpoise are deep divers. They have been recorded diving to 94 m.[8] Dall’s porpoise are prey to killer whales and great white sharks.[9] 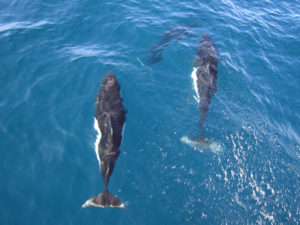 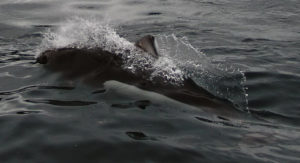